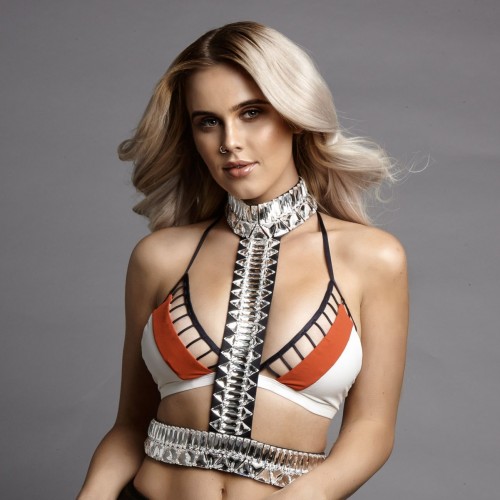 Undeniably captivating from the moment she enters the room, Tigerlily’s electrifying stage presence and drive to transcend the traditional expectations of a DJ sees her in a league of her own. A true entertainer taking the world by storm.

Tigerlily finds herself among Australia’s elite performers with the public voting her in the top 5 DJs for both 2014 and 2015 and the #1 female DJ three years running (via Inthemix). She is also one of the top 10 most engaged Australian acts on social media with fans 7 times more likely to engage in her content than anyone else.A mainstay across the biggest festival and club stages both in Australia and around the world; Tigerlily is no stranger to the world stage. Hand picked as one of Tiesto’s main support acts for Asia and the USA, Tigerlily has enthralled audiences on some of the world’s most renowned stages and venues. From Hakkasan in Las Vegas, Echostage in Washington D.C, and Create Nightclub in Los Angeles to Club Octagon in Seoul, Tomorrowland in Belgium and the Main Stage of Ultra Music Festival Croatia and Electric Zoo New York City, just to name a few.

2016 has been a year of travel for Tigerlily, seeing her cross the globe on extensive tours of: Australia, America, Canada, South America, Europe and the United Kingdom all while curating a substantial discography of single releases. Her latest track, “Invisible Children”, a collaboration with fellow world renowned DJ and Producer KSHMR, was released globally through dance music mega-label SPINNIN RECORDS reaching #1 on the Beatport Electro House Chart, and cementing itself in the Top 10 Overall Beatport Chart.

Having finished her “Kiss My Tigerlily” shows (co-curated by the Squared Division) and long standing residency at Pacha Sydney at the conclusion of 2015, Tigerlily now calls Marquee Nightclub in Sydney her home alongside fellow Australian Dj’s: Will Sparks, MarLo, Timmy Trumpet, Havana Brown and a host of international acts. With two SOLD-OUT shows and the #TeamTiger movement showing no signs of slowing down, expect more of the same electrifying and awe-inspiring performances.

Aside from completing a Media & Communications degree at the University of Sydney and becoming an ambassador for RU OK?, Tigerlily has recently been announced as the new ambassador for LifeLine Australia and is hard in training for the New York Marathon; with the aim of raising money to support the efforts of LifeLine in creating awareness and breaking down the social stigmas of Mental Health.

With the world at her feet and #TeamTiger at her back, Tigerlily has proven herself as one of the Powerhouses of the Australian music industry, creating a global social movement full of music, happiness and positivity that is felt the world over