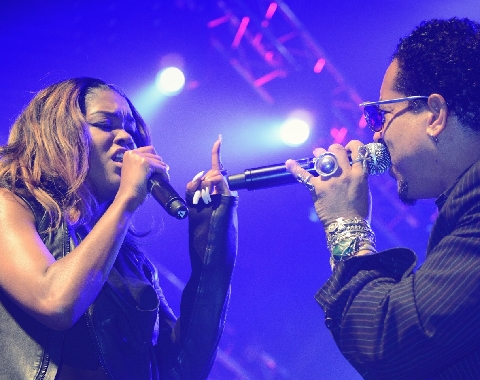 Almost thirty years after it was first released, C+C Music Factory’s debut hit, ‘Gonna Make You Sweat (Everybody Dance Now)’ still feels as fresh as ever. The five times platinum selling single, which reached number one in the US and across Europe and number three in the UK, was followed by ‘Here We Go (Let’s Rock & Roll)’ which reached number 3 Stateside, and the quirky lyrics of ‘Things That Make You Go Hmmm...’, which gave them their third top 4 US hit in a row. Their remix of U2’s ‘In the Name of Love’, under the title of Clivilles + Cole, featured Deborah Cooper’s vocal ‘Deeper Love’ on the B-side, which became a US hit in its own right.

C+C have won five Billboard Awards, five AMAs and two MTV Music Video Awards, and are listed as the 44th most successful dance group ever by Billboard Magazine.

Founded by producers David Cole and Robert Clivilles, C+C Music Factory is a loose collective of musicians and vocalists, which has included collaborators such as Zelma Davis, Martha Walsh and Gonna Make You Sweat vocalist, Freedom Williams. Clivilles and Cole have also worked as part of The S.O.U.L. S.Y.S.T.E.M., The 28th Street Crew and simply The Crew, while Clivilles was part of MVP and also recorded as Robi Rob’s Club World.

Following the death of David Cole in 1995, C+C took a break, reforming in 2010 when Clivilles teamed up with Eric Kupper, releasing a single ‘Rain’ as Scarlett Santana featuring C+C Music Factory. The duo are in huge demand and busy in the studio with both their own work and remixes for top artists, while their timeless signature hit continues to be used on a regular basis for everything from sports highlights to TV commercials.